Laila Majnu is a 1976 Hindi movie based on the legendary story of Layla and Majnun. This film version is directed by Harnam Singh Rawail and stars Rishi Kapoor, Ranjeeta, Danny Denzongpa, Aruna Irani, Asrani, Iftekhar, Tom Alter and Ranjeet. The film's music is by Madan Mohan and Jaidev. 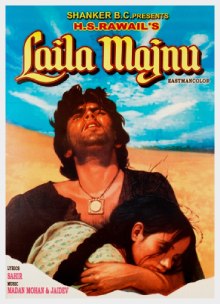 
Layla and Majnun, and Layla and Majnun also known as The Madman and Layla - (Persian: لیلی و مجنون‎‎) in Arabic مجنون و ليلى (Majnun and Layla) or قيس وليلى (Qays and Layla), in Persian: لیلی و مجنون (Leyli and Madjnun), (Leyli və Məcnun) in Azeri - is a classical Arabic story of star-crossed lovers. It is based on the real story of a young man called Qays ibn al-Mulawwah (Arabic: قيس بن الملوح) from the northern Arabian Peninsula. In one version, he spent his youth together with Layla, tending their flocks. In the other version, upon seeing Layla he fell passionately in love with her. In both versions, however, he went mad when her father prevented him from marrying her; for that reason he came to be called Majnun Layla, which means "Layla's Lunatic." It is a love story that originated as poem in 11th Century Arabia, later was adopted by the Persian poet Nizami Ganjaviwho also wrote "Khosrow and Shirin". It is the third of his five long narrative poems, Khamsa (the Quintet).

Film's music is by Madan Mohan and Jaidev with lyrics by Sahir Ludhianvi.