Ram Balram (राम बलराम) is a 1980 Hindi action film directed by Vijay Anand. It starred Dharmendra as "Ram" and Amitabh Bachchan as "Balram". Supporting cast included Zeenat Aman and Rekha. Ajit, Amjad Khan and Prem Chopra were the villains in the film. The film marked the third time in which Bollywood eternal superstars (Amitabh Bachchan and Dharmendra) came together after their previous successful ventures in Chupke Chupke and Sholay. The movie had an awesome initial opening, to thunderous responses all over India with cinema houses packed full. However, proceeds from the movie started to drop by the 4th week and it then went on to surface as the third highest-grossing film of the year earning a "Hit" at the box office. It was termed disappointing since at that time, films of Dharmendra and Amitabh were expected to earn more, who were already the most popular stars at the time. However, some box office analysts rate it as a "Superhit" when taking into consideration its net proceeds. 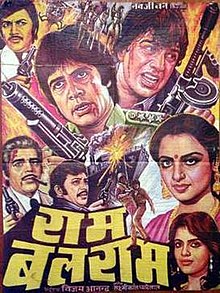