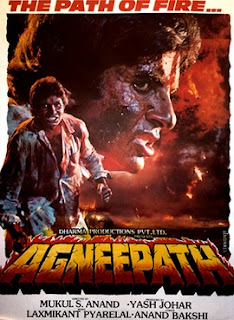 Agneepath (English: The Path of Fire) is a 1990 Indian action drama film directed by Mukul Anand. It stars Amitabh Bachchan as the protagonist Vijay Deenanath Chauhan along with Mithun Chakraborty, Madhavi, Neelam Kothari, Rohini Hattangadi and Danny Denzongpa as the antagonist Kancha Cheena. The film was produced by Yash Johar.


The title was taken from a poem of the same name called 'Agneepath' which was penned by Harivansh Rai Bachchan, Amitabh's father, and which is recited at the beginning of the movie and creates a thematic link that continues through the movie, particularly in the climax, both literally and metaphorically.


Agneepath has grown a strong cult film over the years. Amitabh Bachchan received his first National Film Award for Best Actor at the 38th National Film Awards for his performance. Mithun Chakraborty received the Filmfare Best Supporting Actor Award. The film was remade in 2012 with the same title, by Johar's son Karan Johar, as a tribute to his father. The film, despite being the tenth highest-grosser of 1990, had collections way below its high budget, and thus, the film recorded as flop at the box-office.
Star Cast: Amitabh Bachchan, Danny Denzongpa, Mithun Chakraborty, Neelam
Email ThisBlogThis!Share to TwitterShare to Facebook