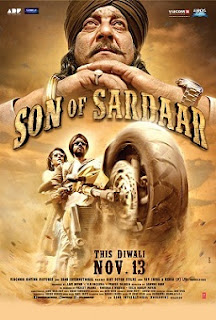 It is a remake of the Hollywood movie Our Hospitality released in 1923 and was first adapted in a Kannada film Balagalittu Olage Baa released in 2002 directed by Dinesh Baboo starring S. Narayan. Although competing with the Yash Raj film Jab Tak Hai Jaan, Son of Sardaar managed to do good business at the box office worldwide.

Box Office India declared it a Hit in India and an average grosser in the overseas markets. It went on to gross ₹1.5 billion (US$22 million) worldwide.

The music of the film was composed by Himesh Reshammiya while the lyrics were penned by Sameer, Shabbir Ahmed, Irshad Kamil & Manoj Yadav. Only one song, "Yeh Jo Halki Halki Khumariya", composed by Sajid-Wajid was also included in the album.