Once Upon Ay Time in Mumbai Dobaara! 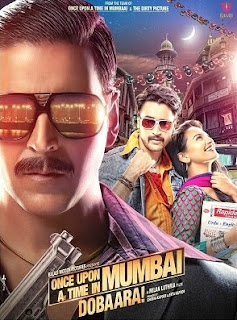 Filming began on 27 August 2012 in Mumbai, with filming moving to Oman in September, becoming the first major Indian production filmed in the sultanate. Footage was shot in beach in Qantab, Qurum, and at the Shangri-La's Barr Al Jissah Resort & Spa in Muscat. The film's visual effects(VFX) were by Reliance MediaWorks, and a team of 40 artists augmented 600 digital shots in one month. The live action sequences were filmed with RED and Arri's Alexa digital motion-picture camera. Once Upon Ay Time in Mumbai Dobaara! was well-promoted, and the film's second trailer was shown on prime-time slots on four television channels. Hollywood actor Al Pacino was shown the theatrical trailer of the film.

The first trailer of the film was released on 28 May 2013, and the film premiered on 15 August, the eve of Independence Day in India. This was later scheduled to avoid clashing with Rohit Shetty's Chennai Express, which was released on 9 August. Once Upon Ay Time in Mumbai Dobaara! received mixed to negative reviews and performed poorly at the box office.
Star Cast: Akshay Kumar, Imran Khan, Sonakshi Sinha
Email ThisBlogThis!Share to TwitterShare to Facebook