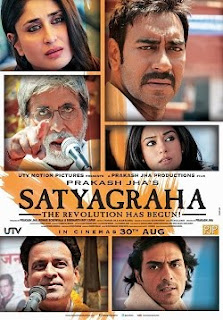 Satyagraha is a 2013 Indian Hindi political drama film directed by Prakash Jha starring Amitabh Bachchan, Ajay Devgn, Kareena Kapoor, Arjun Rampal, Manoj Bajpai, Mitalee Jagtap Varadkar, Amrita Rao, Jagat Singh and Vipin Sharma in the lead roles. The first look of the film was released on 10 September 2012. Satyagraha was released on 30 August 2013, although it released in the UAE one day before on 29 August. The teaser was released online on 30 May 2013 and theatrically attached with Yeh Jawaani Hai Deewani.

He plays the role of Dwarka Anand, a man who is a firm believer of truth and an inherent believer of society who wants his son to give back to society and the nation all that they have given him.

He plays the role of Manav Raghvendra. He represents shining India and is a brilliant telecommunication czar who uses the ways of the world to get what he wants.

She plays the role of Yasmin Ahmed. She is a hard headed TV reporter out in the field. She digs deep and has an opinion. She has a very strong relationship with Manav but when they clash on ideology they break up. Later they reunite when he comes back to his principles.

Plays the role of Arjun, a strong socially committed to become a politician. He studied in the same school of which Dwarka Anand was the principal.

Plays the role of Balram Singh, wily young politician who uses every means to break the system. He is the real threat to democracy.

She plays the role of Sumitra Anand (Dwarka's daughter in-law).

He plays the role of Gauri Shankar, the Leader of the Opposition.

Natasa Stankovic , in a special appearance in an item song.

Prakash Jha in a special appearance.

The soundtrack of Satyagraha is composed by Salim-Sulaiman, Aadesh Srivastav, ambikapur Indian Ocean and Meet Bros Anjan, while the lyrics penned by Prasoon Joshi. It was released on 30 July 2013.