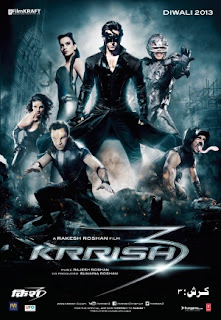 Krrish 3 is a 2013 Bollywood superhero science fiction film produced and directed by Rakesh Roshan. It is the third film in the Krrish series following Koi... Mil Gaya (2003) and Krrish (2006). The film stars Hrithik Roshan , Vivek Oberoi , Priyanka Chopra, and Kangana Ranaut in the lead roles. The story follows the life of Rohit Mehra, a scientist, and Krishna Mehra a.k.a. Krrish, his superhero son, who face an elaborate conspiracy orchestrated by the evil genius Kaal and his female henchman Kaya. In the process, Krishna's pregnant wife Priya is kidnapped by Kaal and the form-changing Kaya takes her place at the Mehra home and eventually falls in love with Krishna.

Krrish 3 was initially scheduled to release as a 3D film. However, due to lack of time to convert the film to 3D, director Rakesh Roshan mentioned that the film will be released only in the 2D format. Krrish 3 released worldwide on 1 November 2013. It has since received mixed reviews from film critics with praise directed towards Roshan and Ranaut's performances, the visual effects, and the cinematography; criticism has been directed to the music provided by composer and the director's brother Rajesh Roshan, the story and screenplay.
Star Cast: Hrithik Roshan, Kangana Ranaut, Priyanka Chopra, Vivek Oberoi
Email ThisBlogThis!Share to TwitterShare to Facebook