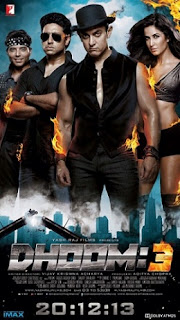 Dhoom 3 (English: Blast 3 or Boom 3, also abbreviated and known as D:3
and D3 ) is a 2013 Indian action film , written and directed by Vijay
Krishna Acharya and produced by Aditya Chopra. The third installment
of the Dhoom series , it features Aamir Khan as the antagonist and
Katrina Kaif , with Abhishek Bachchan in the lead role reprising his
role of ACP Jai Dixit and Uday Chopra reprising his role as Ali Akbar,
as in the previous films of the franchise. Made on a budget of ₹175
crore (US$26 million), the most expensive Indian film of all
time,until it was beaten by Baahubali: The Beginning. Dhoom 3 was
released on 20 December 2013, marking itself as the first Indian film
to be released in the IMAX motion picture film format with Dolby Atmos
surround sound.