Bhoothnath Returns (The Lord of Ghosts Returns) is a 2014 Indian super natural political comedy film directed by Nitesh Tiwari and produced by Bhushan Kumar. A sequel to 2008 film Bhoothnath, the film revolves around Bhoothnath (Amitabh Bachchan) who is mocked in a Bhoothworld for his inability to scare children before being sent back to Earth to redeem himself. The film was released on 11 April 2014, and declared as one of the highest grossers according to Box Office India. 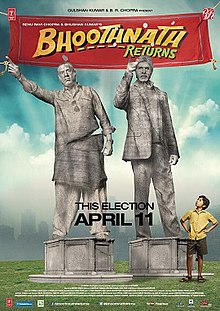 Election Commission of India demanded tax-free status for Bhoothnath Returns, stating, "The state governments should support the strong social message that emanates from the film. Granting tax-free status to this film would make people aware about their rights as voters like making voter ID cards or not treating polling day as holiday". The Uttar Pradesh Government has declared tax-free status to film on 30 April 2014.

The film score was composed by Hitesh Sonik while the songs featured in the film were composed by Ram Sampath, Meet Bros Anjjan and Palash Muchhal. Yo Yo Honey Singh also composed one promotional song for the film which remarked as its first collaboration with Amitabh Bachchan.