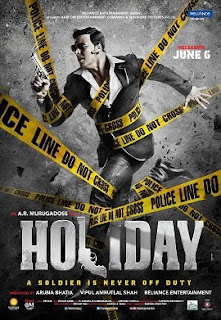 Holiday: A Soldier Is Never Off Duty is a 2014 Indian action thriller film written and directed by A. R. Murugadoss, and produced by Vipul Shah. It features Akshay Kumar and Sonakshi Sinha in the lead roles, along with Govinda, Freddy Daruwala and Sumeet Raghavan in supporting roles. It is a remake of the 2012 Tamil Action film Thuppakki which was also directed by A. R. Murugadoss. The film released on 6 June 2014, becoming the biggest net grosser of the first half of 2014. Akshay Kumar was nominated Filmfare Award for Best Actor at 60th Filmfare Awards.
Star Cast: Akshay Kumar, Govinda, Sonakshi Sinha, Sumeet Raghavan
Email ThisBlogThis!Share to TwitterShare to Facebook