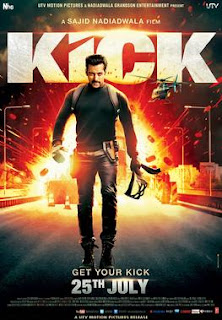 Kick is a 2014 Indian action film produced and directed by Sajid Nadiadwala under his Nadiadwala Grandson Entertainment banner. It is an official remake of a Telugu movie Kick which was released in 2009. The film features Salman Khan, Jacqueline Fernandez and Randeep Hooda in the lead roles and Nawazuddin Siddiqui, portraying the main antagonist of the film. The screenplay was adapted by Nadiadwala and Chetan Bhagat. The film released on 25 July 2014 in about 5,000 screens worldwide.