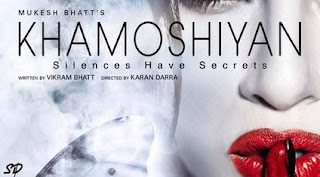 The film stars Gurmeet Choudhary, Ali Fazal and Sapna Pabbi in principal roles. Initially, the film was scheduled for release on 23 January 2015, but was postponed to 30 January 2015.

The soundtrack of Khamoshiyan was composed by Ankit Tiwari , Jeet Ganguly, Navad Zafar & Bobby Imraan. The lyrics for the soundtrack were penned by Rashmi Singh and Sayeed Quadri. The first single of the album, "Khamoshiyan", composed by Jeet Ganguly and crooned by Arijit Singh, was released on 10 December 2014. The second single of the album, "Tu Har Lamha", composed by Bobby Imraan and sung by Arijit Singh, was released on 19 December 2014.

Additionally, the filmmakers purchased the rights of the song "Aayega Aane Wala" from
the film Mahal (1949).