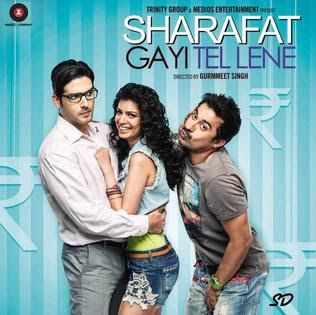 Sharafat Gayi Tel Lene is a 2015 bollywood , comedy thriller film directed by Gurmmeet Singh and produced by Devinder Jain and Akhilesh Jain featuring Zayed Khan, Rannvijay Singh and Tena Desae in lead roles.The concept was given by Anand Kumar and Rajesh Chawla whereas dialogues was written by Rajesh Chawla and Vivek Chaudhary Sharafat Gayi Tel Lene is a comic thriller and deals with a common man who gets trapped in a notion that honesty is a best policy but sometimes, especially in today times that is not a best option and you have to bend the rules to safeguard yourself more than getting ahead in life. Zayed is playing the main role of Prithvi Khurana. Ranvijay is playing his roommate-Sam the main girl is Tina Desai-it is going to be her first film and there is another girl-Talia Benson. Upon release, the film received mixed reviews.