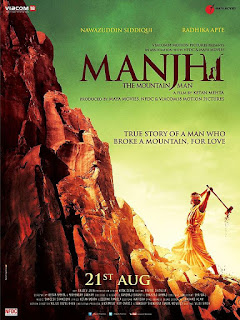 Manjhi - The Mountain Man is a 2015 Indian biographical film, based on the life of Dashrath Manjhi. Manjhi, widely known as the "Mountain Man", was a poor labourer in Gehlaur village, near Gaya in Bihar, India, who carved a path 9.1 metres (30 ft) wide and 110 metres (360 ft) long through a hill 7.6 metres (25 ft) using only a hammer and chisel. The film is directed by Ketan Mehta, jointly produced by Viacom 18 Motion Pictures and NFDC India. Upon release the film received positive critical acclaim. Nawazuddin Siddiqui enacted the role of Dashrath Manjhi, while Radhika Apte played Manjhi's wife. The film was released worldwide on 21 August 2015. Prior to its release preview copy of movie leaked on web on 10 August 2015. The Bandra-Kurla Complex (BKC) cyber police station had registered a case against a few unknown persons for leaking the movie. The Bihar State Government declared the film tax-free on 30 July 2015.