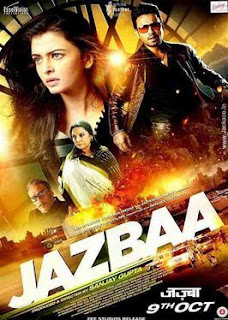 Jazbaa (translation: Passion or Emotion) is an Indian crime thriller film directed by Sanjay Gupta. The film's narrative revolves around an attorney forced to defend an unsavory criminal after her daughter is kidnapped. It stars Aishwarya Rai Bachchan and Irrfan Khan in the lead roles, with Shabana Azmi, Atul Kulkarni, Jackie Shroff and Chandan Roy Sanyal in supporting roles. It is a remake of the 2007 South Korean film Seven Days. The film was released on 9 October 2015 and turned out to be financially profitable. The film marked Aishwarya's return on screen after a five-year break.


Rai's performance received nominations for Best Actor in an Action Role at 2015 Big Star Entertainment Awards and in 2016, Screen Award for Best Actress (Popular Choice). She won Power-packed performance of the year at Stardust Awards.