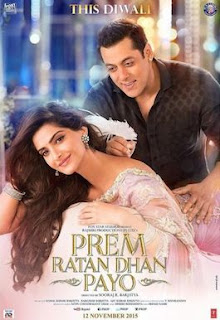 Prem Ratan Dhan Payo (translation: Found a Treasure Called Love) is a 2015 Indian romantic drama film, written and directed by Sooraj Barjatya, produced by Rajshri Productions and distributed by Fox Star Studios. It stars Salman Khan and Sonam Kapoor in lead roles. This is the fourth collaboration between Barjatya and Salman after their previous films Maine Pyar Kiya, Hum Aapke Hain Koun..! and Hum Saath Saath Hain. The cinematography of the movie was done by V. Manikandan and was edited by Sanjay Sankla. The soundtrack was composed by Himesh Reshammiya, and the background music done by Sanjoy Choudhury. The film was released in India and Pakistan on 12 November 2015 to very mixed reviews from critics and audience. It emerged as a commercial success and ranks among the highest-grossing Bollywood films, with a gross between ₹ 400 crore (US$59 million) and ₹432 crore (US$64 million) worldwide. The film was also released in Tamil and Telugu versions as Meymarandhen Paaraayo and Prema Leela , respectively.