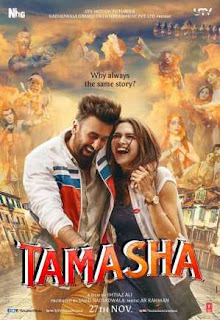 Tamasha (English: A spectacle) is a 2015 Indian romantic drama film written and directed by Imtiaz Ali and produced by Sajid Nadiadwala under his banner, Nadiadwala Grandson Entertainment. It features Ranbir Kapoor and Deepika Padukone in lead roles. The film score and soundtrack album was composed by A. R. Rahman, with lyrics from Irshad Kamil.

The film was released on 27 November 2015 to mixed reviews by film critics. However, they praised the performances of lead actors but criticised the unsatisfactory togetherness of the plot. The film received nominations for direction, music and performances of the lead actors, notably Kapoor being nominated under Filmfare Award for Best Actor category and Irshad Kamil winning the Filmfare Award for Best Lyrics for his lyrical work to the soundtrack album of the film.
Star Cast: Deepika Padukone, Ranbir Kapoor
Email ThisBlogThis!Share to TwitterShare to Facebook