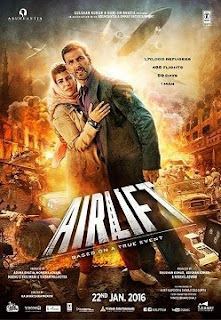 Airlift is a 2016 Indian film directed by Raja Krishna Menon , starring Akshay Kumar and Nimrat Kaur. The script, written by Raja Krishna Menon developed the idea after studying the whole incident of the war, and which he subsequently expanded. The film follows Ranjit Katyal (Akshay Kumar), a Kuwait-based businessman, as he carries out the evacuation of Indians based in Kuwait during the Invasion of Kuwait by Saddam Hussein's Iraq.

With a budget of ₹30 crore (US $4.5 million), the film premiered worldwide on 22 January 2016. The marketing of the film played an important role in the film's promotion and collaborated with the flight company Air India , who had a major contribution in the evacuation of record-breaking number of Indians during the war.

Airlift was theatrically released on 22 January 2016, with an international premiere being held on 21 January.
Star Cast: Akshay Kumar, Nimrat Kaur
Email ThisBlogThis!Share to TwitterShare to Facebook