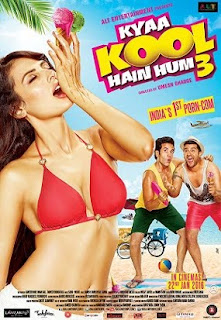 Kya Kool Hain Hum 3 is a 2016 Indian adult comedy film starring
Tusshar Kapoor, Aftab Shivdasani and Mandana Karimi in lead roles
along with Gizele Thakral, Claudia Ciesla, Krishna Abhishek, Shakti
Kapoor, Darshan Jariwala in pivotal roles. It was released on January
22, 2016. The film is a sequel to 2012 film Kyaa Super Kool Hain Hum
and the third installment of Kyaa Kool Hain Hum film series. The film
got an 'A'(Adults Only) certificate from the CBFC India for its strong
sex references, after going through 200 cuts, which the board ordered,
in order to pass the film.