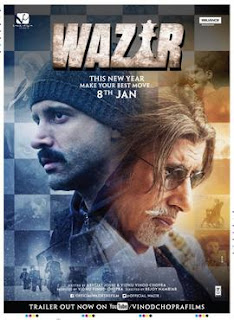 The film tells the story of two unusual friends, a wheelchair-bound chess grandmaster and a grief-stricken ATS officer, who are brought together by a peculiar twist of fate as part of a wider conspiracy that has cast a dark shadow over their lives. Principal photography began on 28 September 2014 in Mumbai. The film was released worldwide on 8 January 2016. The film collected worldwide Rs: 44.27 crores and was the first hit movie of 2016.

The film's soundtrack album was composed by various artists: Shantanu Moitra, Ankit Tiwari, Advaita (band), Prashant Pillai, Rochak Kohli, and Gaurav Godkhindi. The background score was composed by Rohit Kulkarni while the lyrics were penned by Chopra, Swanand Kirkire, A. M. Turaz, Manoj Muntashir and Abhijeet Deshpande. The album rights of the film were acquired by T-Series. The first single track "Tere Bin" released on 4 December 2015. The video focuses on Farhan Akhtar and Aditi Rao Hydari; the song is sung by Sonu Nigam and Shreya Ghoshal and composed by Shantanu Moitra, with lyrics penned by Vidhu Vinod Chopra. The second single track, "Tu Mere Pass", composed and sung by Ankit Tiwari with lyrics by Manoj Muntashir, was released on 11 December 2015. The third single track, "Maula Mere Maula", was released on 18 December 2015. The song was composed by Shantanu Moitra, sung by Javed Ali and written by Chopra and Swanand Kirkire. The song "Khel Khel Mein" was composed by Advaita in the band's first motion picture.