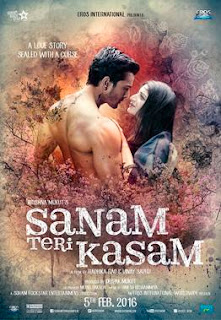 
Sanam Teri Kasam is a 2016 Indian romantic film starring Harshvardhan
Rane and Pakistani actress Mawra Hocane. It is directed by the duo
Radhika Rao- Vinay Sapru and produced by Deepak Mukut. The film is a
modern rendition of the novel Love Story by Eric Segal. The film was
released worldwide on 5 February 2016 under the production banner of
Eros Now.