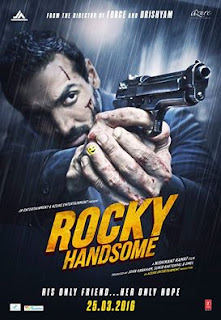 Rocky Handsome is a 2016 Indian action thriller film directed by
Nishikant Kamat. It features John Abraham and child artist Diya
Chalwad in the lead roles while Shruti Haasan , Nishikant Kamat and
Sharad Kelkar appear in crucial supporting roles. It is an official
adaptation of the 2010 Korean film The Man from Nowhere.

Co-produced by Abraham under his home banner John Abraham
Entertainment in association with Sunir Khetrapal's Azure
Entertainment, the film's story revolves around a man who sets out to
take vengeance against drug mafia after they take away an
eight-year-old girl, with whom he shares a special bond.

The theatrical trailer was released on 4 March 2016, and the film released on 25 March, 2016.
Star Cast: John Abraham, Shruti Haasan
Email ThisBlogThis!Share to TwitterShare to Facebook