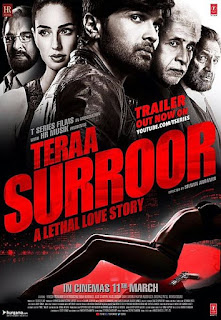 Teraa Surroor, previously known as Guns N' Roses is a 2016 Indian Hindi-language action-drama film directed by Shawn Arranha and produced by Vipin Reshammiya and Sonia Kapoor. It is sequel to 2007 film Aap Kaa Surroor. The film was a joint production of T-Series and HR Musik Limited. It was previously titled Guns N' Roses. The film stars Himesh Reshammiya and Farah Karimaee in the lead roles. Naseeruddin Shah, Shekhar Kapur, Kabir Bedi, and Monica Dogra play the supporting roles. Teraa Surroor was released on 11 March 2016 in over 1000 cinemas all over India and it mostly received negative reviews though it collected more money and became bigger hit than Himesh's first film.

The soundtrack of Teraa Surroor was composed by Himesh Reshammiya himself. The first track of the soundtrack titled Main Woh Chaand was released on 29 January 2016. It was sung by Darshan Raval. The soundtrack received positive reviews. Mohar Basu of The Times of India rated the music 3 out of 5 where as Sreeju Sudhakaran of Bollywood Life rated the soundtrack 4 out 5. Preeti Lopes of bollywood capsule rated the album 4.5 out of 5 stating "the music album of 'Teraa Surroor' is the best of the year so far. Versatile singing, heart touching lyrics and engrossing compositions along with some great opportunities provided by Himesh Reshammiya to the upcoming talent that our country has in abundance." Badshah also sang the song Teri Yaad with Himesh.