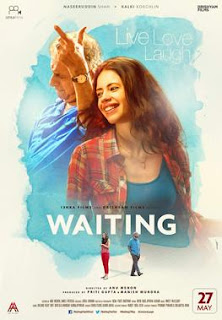 Waiting is a 2015 Indian comedy drama film co-written and directed by Anu Menon. Produced by Priti Gupta and Manish Mundra under the banner of Ishka Films and Drishyam Films, the film stars Naseeruddin Shah and Kalki Koechlin in lead roles. Waiting revolves around the relationship between two people from different walks of life, who befriend each other in a hospital, while nursing their respective comatose spouses. Rajat Kapoor, Suhasini Maniratnam , Arjun Mathur, Ratnabali Bhattacharjee and Rajeev Ravindranathan play supporting roles in the film.

Development began in June 2014, when Menon signed Koechlin and Shah for an upcoming untitled project. Principal photography began in November 2014 in the coastal town of Kochi. Neha Parti was the director of photography, and Mickey McCleary composed the film score, which was released in May 2016, under the label of Zee Music Company. The lyrics were written by Manoj Muntashir and Ankur Tewari. Nitin Baid and Apurva Asrani edited the film, and Atika Chohan wrote the dialogues. The film had its world premiere at the Dubai International Film Festival on 11 December 2015 to positive reviews from critics.

Waiting was also screened at the closing gala of the London Asian Film Festival, where Menon won the Best Director Award, and at the Indian Film Festival of Los Angeles. The film had released theatrically on 27 May 2016, with A-certification from the censor board. Upon release in India, Waiting was well received by critics with particular praise for the performances of both Koechlin and Shah. The film, however, was an average grosser at the box office, collecting a total of ₹39 million (US $580,000) during its theatrical run.
Star Cast: Kalki Koechlin, Naseeruddin Shah, Rajat Kapoor
Email ThisBlogThis!Share to TwitterShare to Facebook