The Legend of Michael Mishra 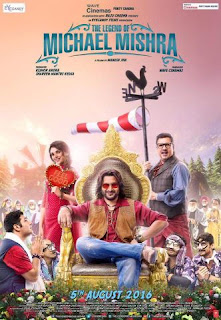 The Legend of Michael Mishra is a 2016 Bollywood comedy film written and directed by Manish Jha. It is produced by Kishor Arora and Shareen Mantri Kedia of Eyecandy Films. The film stars Arshad Warsi, Aditi Rao Hydari, Boman Irani and Kayoze Irani. It was released on 5 August 2016.

The music for the film is composed by Meet Bros Anjjan, Som-Raul, Abhinav Bansal, Rishi-Siddharth and Ujjwal-Nikhil while the lyrics have been penned by Kumaar, Alaukik Rahi, Abhinav Bansal, Amitabh Ranjan, Manish Jha and Ujjwal-Nikhil. The music rights are acquired by T-Series. The first song titled "Luv Letter" was released on 18 July 2016 while the full album was released on 21 July 2016.