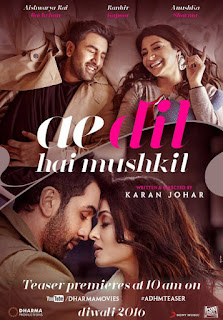 Ae Dil Hai Mushkil (This Heart is Complicated) is a 2016 Indian romantic drama film written and directed by Karan Johar. It features Aishwarya Rai Bachchan, Ranbir Kapoor and Anushka Sharma in lead roles. It was released on 28 October 2016 on the Diwali weekend.

The soundtrack of the film is composed by Pritam, with lyrics written by Amitabh Bhattacharya. On 30 August 2016, the audio of the title track was released digitally. The music rights are acquired by Sony Music. The full album was released on 26 October 2016.