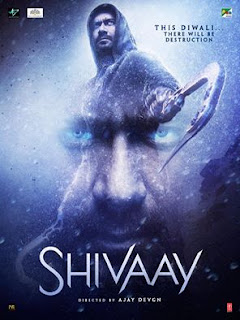 Shivaay is a 2016 Indian action thriller film directed and produced by Ajay Devgan under his banner Ajay Devgn FFilms. It features Ajay Devgn, Sayyeshaa Saigal, and Erika Kaar in lead roles. Mithoon has composed the film's score and soundtrack. British band The Vamps and composer Jasleen Royal are also a part of the music.

Shivaay was released on 28 October 2016 on the Diwali weekend.

The film opens with a Himalayan mountaineer, Shivaay, rapelling down a steep and dangerous cliff in the Himalayas. Shivaay lives alone in a small house in the mountains and makes a living by providing treks and climbing expeditions to tourists. On one such trek he meets the beautiful Olga, a student from Bulgaria and saves her from an avalanche. They eventually fall in love. Olga becomes pregnant.

He implores her to remain in India with him, but despite her love for Shivaay, Olga does not want the child.. She wants to return to Bulgaria and asks Shivaay to return with her but he cannot adapt to that life. He begs her to give him the child after which he will not stop her. Olga has a beautiful daughter, Gaura, who looks just like her mother, and asks Shivaay to tell the daughter that her mother passed away, and leaves India forever.

Eight years later Shivaay leads a happy life with Gaura in the mountains. There is a turn when Gaura discovers her mother's last letter and confronts Shivaay and insists to be taken to Bulgaria. Shivaay and Gaura arrive in Sofia and begin looking for Olga. During this time Shivaay discovers that young children are being trafficked through Bulgaria. He saves one young child and
this is reported in the press. Shivaay requests the Indian embassy for help in tracing Olga and is assigned to Anu, an eager young officer at the embassy. The traffickers, led by the baron Ustinov and his right hand man, the unseen Changez, come after Shivaay and kidnap Gaura.

Shivaay chases the van destroying various cars and causing the unintentional death of a police officer in the process. He loses the van and is
arrested by the Bulgarian police and charged with murder and trafficking. The latter charge is applied because he was never married to Olga and the police therefore refuse to believe that Gaura, who is fair skinned, is his own daughter.
Shivaay breaks out of the police transport killing another officer in the process and reaches Anu who advises him to surrender. The other embassy officer explains that the trafficking trade is worth billions and is operated by very
dangerous men with deep police and political connections. Shivaay meets Anu privately but she alerts the cops and Shivaay is nearly arrested again. He escapes and disappears into the streets. He visits various slums and brothels asking about his daughter and ends up busting open a small flesh trade den and liberating many young children. Anu is shocked at Shivaay's rage until her own father explains that they are merely the actions of a desperate father. When Shivaay brings one of the saved prostitutes to Anu's home and asks Anu to help her out, Anu has a complete change of heart and agrees to help
Shivaay locate his daughter even if it means going outside legal limits. Anu and Shivaay seek the help of Anu's wannabe boyfriend and computer hacker Wahab to recover CCTV footage of Shivaay's various chases.

Shivaay is able to identify Ivanovich and, through Wahab's computer hacking, is able to lure Ivanovich to a trap. After a vicious fight, Ivanovich reveals Ustinov's location and the reference to Changez. Olga, having now seen television coverage of Shivaay, meets Shivaay and joins the quest to find Gaura. Arriving at Ustinov's mountain lodge, Shivaay finds Ustinov dead, and finds the bodies of various children, who were victims of the organ trade, in the basement. He discovers that Gaura has been taken away to Romania to be sold into the flesh trade. Shivaay deduces that Changez has to be a dirty cop: only a cop would be able to trace the CCTV computer download and thus beat Shivaay to the Ustinov cabin.

Shivaay chases after the transport van carrying his daughter off to Romania. He uses his advanced mountain skills to scale the Balkan mountains near Vidin-Calafat and stop the van. A prolonged and vicious fight ensues as Changez, now revealed to be Captain Nikolai of the Bulgarian Police, attacks Shivaay. After a savage hand-to-hand fight, Shivaay kills Changez with a three-pronged ice stalactite. Gaura is reunited with Olga who is now married to a wealthy Bulgarian and can provide Gaura with every comfort. Shivaay is devastated at the prospect of losing Gaura, but, seeing as Olga now beseeches him, he leaves for the airport with a heavy heart.

The film ends as Gaura runs into Shivaay's arms and rips up his tickets before he boards the plane.

Ajay Devgan as Shivaay, a tourist guide and mountaineer
Sayesha Saigal as Anushka, a budding IFS officer at the Indian embassy in Sofia, Bulgaria
Erika Kaar as Olga, Shivaay's former lover and the mother of Gaura
Abigail Eames as Gaura, Shivaay's young daughter who he got from his former lover, Olga
Vir Das as Wahab, an expert computer hacker who has a crush on Anushka
Girish Karnad
Saurabh Shukla
Bijou Thaangjam as Kancha, Shivaay's
friend.

Shivaay's soundtrack is composed by Mithoon with guest vocal appearance by the British Pop-rock band The Vamps, while the lyrics been penned by Sayeed Quadri & Sandeep Shrivastava. On 11 September 2016 the title track of Shivaay titled Bolo Har Har Har was released, which was sung by Mithoon, Mohit Chauhan, Sukhwinder Singh, Badshah, Megha Sriram Dalton, Anugrah. The second song, "Darkhaast", was released on 22 September 2016, and featured vocals by Arijit Singh and Sunidhi Chauhan. All the music rights of Shivaay are acquired by T-Series.