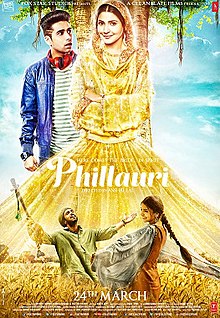 Phillauri is a 2017 Indian Hindi romantic comedy film, directed by Anshai Lal and produced by Fox Star Studios, Anushka Sharma & Karnesh Sharma under the banner of Fox Star Studios and Clean Slate Films. Director Navdeep Singh and writer Sudip Sharma are associated with the film as Creative Producers. The film will have Anushka Sharma, Diljit Dosanjh and Suraj Sharma in the lead roles. The film's first official poster was released on February 3, 2017. The film released on March 24, 2017 to positive to mixed reviews.

The music of the film is composed by Shashwat Sachdev with Jasleen Royal as a guest composer while the lyrics have been penned by Anvita Dutt Guptan, Aditya Sharma, Neeraj Rajawat and Shellee. Sameer Uddin has composed the background score. The music rights are acquired by T-Series. The first song "Dum Dum" was released on 16 February 2017. The full soundtrack album was released on 6 March 2017.
All music composed by Shashwat Sachdev (except where noted).