Sachin: A Billion Dreams is a 2017 Indian docudrama-biographical film directed by James Erskine and produced by Ravi Bhagchandka and Carnival Motion Pictures under 200 NotOut Productions. The film is based on the life of Indian cricketer Sachin Tendulkar. The film was released on 26 May 2017. It captures Tendulkar's cricket and personal life in substantial detail, as well as reveals few aspects of his life which have never been heard of or seen before. The film is simultaneously shot in  Hindi,  Marathi  and  English. Dubbed versions of the film will be released in Tamil and Telugu. 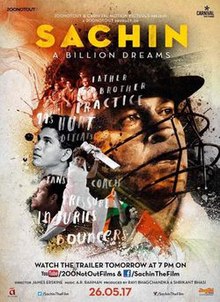 The Film has been declared tax free in Chhattisgarh, Karnataka, Kerala, Maharashtra and Odisha.

Sachin Tendulkar (as himself)

Arjun Tendulkar as himself

Ajit Tendulkar as himself

Anjali Tendulkar as herself

Sara Tendulkar as herself

Harsha Bhogle as himself

Mahendra Singh Dhoni as himself

Sourav Ganguly as himself

Virender Sehwag as himself

Yuvraj Singh as himself

Harbhajan Singh as himself

Virat Kohli as himself

Kapil Dev as himself

The film was released on 26 May 2017 in India. on 21st May, Sachin Tendulkar conducted a special screening of the film for the Indian Armed Forces personnel at the Indian Air Force Auditorium.

Since the filmmakers wanted the film to appeal to the cricketer's diverse fans nationwide, it was also released in five languages – English, Hindi, Marathi, Tamil and Telugu.

The name of the film was selected via a contest that Sachin Tendulkar had announced on Twitter.

In May 2017, Sachin traveled to London to promote the film.

Soundtrack album by A. R. Rahman

The music of the film is composed by A.R. Rahman, while lyrics is written by Irshad Kamil. The full soundtrack consisting 3 tracks was released on 24th April 2017 by Times Music. The lyrics for Tamil, Marathi, Telugu songs were written by Madhan Karky, Subodh Khanolkar and Vanamali respectively.