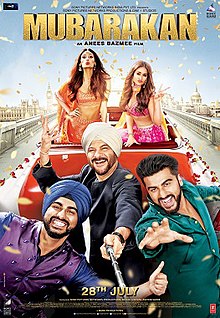 
Anil Kapoor, Arjun Kapoor, Ileana D'Cruz and Athiya Shetty played the lead roles in the film. It is a story about twin brothers. The film was released worldwide on 28 July 2017 in 2350 screens in India and 475 screens overseas.

The music of the fim has been composed by Amaal Mallik, Gourov Roshin, Rishi Rich and while the lyrics have been penned by Kumaar. Its first song "Mubarakan Title Track" was released on 22 June 2017. The second single titled as "Hawa Hawa" which is sung by Mika Singh and Prakriti Kakar was released on 29 June 2017. The whole soundtrack of the film was unveiled on 6 July 2017 by T-Series which consists 6 songs.