Toilet: Ek Prem Katha (Toilet - A Love Story) is a 2017 Indian Hindi-language film directed by Shree Narayan Singh. Co-produced by Akshay Kumar and Neeraj Pandey, the film stars Akshay Kumar and Bhumi Pednekar in the lead roles, with Anupam Kher, Sudhir Pandey and Divyendu Sharma in supporting roles. The film was released on August 11 2017. The film is a satirical comedy in support of Indian Prime Minister Narendra Modi's Swachh Bharat Abhiyan, a governmental campaign to improve the sanitation conditions, with an emphasis on the eradication of open defecation, especially in rural areas. 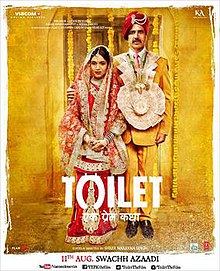 
The of the film is composed by the Vickey Prasad, Manas-Shikhar and Sachet-Parampara while the lyrics have been penned by Siddharth Singh and Garima Wahal. The first track of the film titled "Hans Mat Pagli" which is sung by Sonu Nigam and Shreya Ghoshal was released online on June 28 2017. The second track Bakheda sung Sukhwinder Singh and Sunidhi Chauhan was released on 5 July 2017. The third song to be released was Gori Tu Latth Maar which is voiced by Sonu Nigam and Palak Munchal was released on 12th July 2017. The soundtrack was released on 13 July 2017 by T-Series which consists of 5 songs. The song Toilet Ka Jugaad sung by Akshay Kumar and Vickey Prasad was included in the film but was not released along with the soundtrack. It was later released on 4th August 2017.